That there should be a legal age for using mobile phones

bookydedreamer (PRO)
To begin, thank you Emalak for agreeing to debate this topic with me!
I would like to start by defining some terms.
Terms and Definitions
Cell/Mobile Phone : A smart phone which is capable of making calls, connecting to the internet, texting and hosting various apps including email, games and video streaming services.
Using a cell phone : Engaging in any activities on the cellphone, including making calls, texting, playing games and watching video.
Child : A person within the ages of 6 to  17; approx the ages when most US children are going to school.
I will be making the following arguments:
1. Cell phones spread germs (especially to children)
2. Cell phone use encourages negative lifestyles
3. Cell phones are distracting
4. Cell phone use increases risk by predators
Cell Phones spread germs
During childhood, most children attend school. Most schools include classrooms with between 10 and 30 students and encourage shared use of resources and toys. In addition, many children do not yet understand the spread of germs and engage in activities more likely to spread germs (such as not sneezing into the crook of their elbow, not washing hands frequently and being more prone to transfer material from their mouth to hands to objects). See WebMD
All of these factors lead to to increased sickness in children compared to adults. Adults who are around children more are also more likely to get sick more frequently.
So, what does this have to do with cell phones?
Studies show that most cell phones are cesspools of germs. In fact, they are  10 times dirtier than a toilet seat.  Think that number seems reasonable for children with all their rampant germs? That number comes from a survey of high-schoolers; a group much less prone to the poor hygiene I was describing earlier.
In fact,  the germs are so high that a second study was conducted specifically about how to avoid cross-contamination from university student cell phones in hospitals!
There are studies that show that some germ exposure can be good for us, but leading experts are recommend (see both of my cited articles) that the amount of germs we commonly carry on our cell phones is unhealthy and more likely to lead to disease.
Cell Phone use encourages negative lifestyles
To begin,  a number of studies have linked increased smartphone and TV use to decreased cognitive function and increased obesity. This is largely due to how sedentary these lifestyles are, and how many people who spend so much time on devices are much less likely to exercise. Obesity is linked to a number of other conditions including cancer, hearth disease and Type 2 diabetes. Obesity is a growing health concern that has been increasing as the population becomes more sedentary - encouraging our children to be sedentary young is vastly increasing the problem.
However, this is not the only type of negative lifestyle cell phone use encourages. Cell phone use also exposes children to violence, adult content and risky behavior which causes increased aggression and increases the risk in engaging in risky behavior.
Most parents accept the fact that there is content their children can access on their phones that they may not be ok with. Whether this is R rated material, violent material or material deemed too "sexy" for a child, many parents will use parental controls to control and to oversee what content their child is accessing.  This brings us to the third negative lifestyle that cell phone use encourages: unhealthy surveillance behavior.
Obviously, it does benefit a child not to see some of the darker content on the internet . . . but where should the line be drawn? Should a pre-teen be allowed free access? What about a teenager? When should they be allowed unmonitored access to make their own purchases on websites?
Increased means and knowledge of surveillance also makes it much easier to survey people in an unhealthy way - for example, for a teenager to spy on his girlfriend when he think she might be cheating on him. Spying on someone can cause a host of negative psychological effects including increased anxiety, increased depression and paranoia.  That doesn't even go into the negative effects it can have on the relationship between a parent and a child. For digital savvy children, a lot of this spyware may not even work - there are plenty of ways to get around it. Even parental control software apps including warnings about the potential cons of using their software.
Cell Phones are distracting
I think everyone can agree that cell phones can be distracting to others. However, I suspect most people also believe that they understand the risks and manage their phone usage so that they are not negatively impacted by this distraction. This kind of belief has essentially been proven to be false. For example, studies show that just having a cell phone near you can distract you.
There are two major areas where cell phone distraction negatively affects children: when doing classwork and when driving.
If children are distracted when doing schoolwork, it could affect their grades and potentially their future career opportunities.  Many schools have begun including more digital learning on tablets and smart phones. However, multiple studies show that cell phones are highly distracting to students. Eliminating them has even been touted as an easy low-cost way to increase test scores!  Studies even show the student cell phone use can negatively impact the teacher's ability to teach!
If children are distracted when driving, they could potentially be heavily injured or even die.  This information is touted so much that it can seem like fear mongering, but it is supported by traffic statistics.

Even being distracted as a pedestrian around cars increases risk of death or injury dramatically. These risks are dramatically increases in children as children are not psychically capable of understanding the full consequences of their actions.
Cell Phone use increases risk by predators
Identity theft is a growing problem, and children are a big target for identify theft. This is because they are often given social security numbers at birth, and those social security are not used for years - meaning that the child has "clean" credit where theft may not even be noticed for over a decade.  The New York times recently did a feature on how identity theft posts extra troubles for children.  It's such a big problem that the FTC even has a section specifically to educate parents on child identify theft.
Some people believe that cell phones should be safer than using a computer in terms of protecting their identity. However, that's a myth.  In fact, according to the CEO of LifeLock INC, "smartphone users are one-third more likely to fall prey than the general public".
Another big risk children with smartphones are exposed to is cyber bullying.  Cyer bullying has increased dramatically as more children spend more time on computers and smartphones.
But what exactly is cyber bullying? 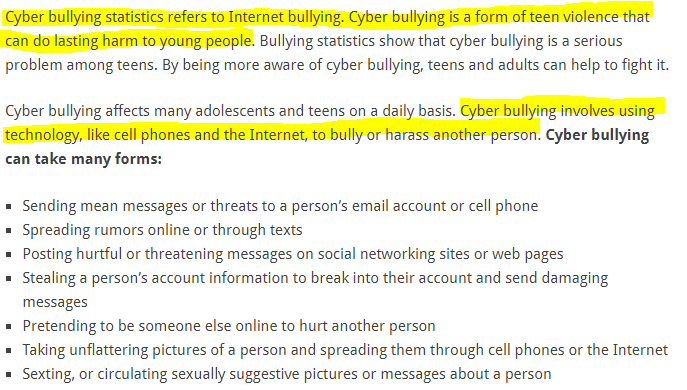 (Source: http://www.bullyingstatistics.org/content/cyber-bullying-statistics.html)
In fact, according to that same source, over 80% of teens use a cell phone regularly, making it the most popular form of technology and a common medium for cyber bullying. As I already mentioned, children and teenagers are not psychically capable of understanding the full consequences of their actions.
Many children bully others because they think it's funny, or that it's joke. However, cyberbullying statistics show that this behavior causes a big impact to self esteem, increases the rate of self-harming behaviors in children, increases suicidal thoughts, and increases suicide attempts. This is  a major threat to children and teenagers, and impacts as many as 70% of them.
In conclusion
In conclusion, there are a wide range of negative effects seen in all aspects of allowing children to use mobile phones. This effect has been emphasized further as the average age a child receives their first smartphone is decreasing.
Here are some of the negative effects children experience when using their smart phones:
- Children use smartphones in a way that promotes the spread of germs, causing increased disease.
- Children use their smartphones in place of physical activity, increasing their risk for obesity and further negative health effects.
- Children expose themselves to violent and risk-tasking behavior, increasing their risks of becoming more aggressive or engaging in that same risky behavior
- Children are exposed to surveillance (which increases anxiety) and taught that spying on other is ok and acceptable
- Children experience decreased learning as a result of distraction, even if they aren't using the smartphone themselves
- Children are more likely to be involved in a car accident, even if they are only near cars and not actually driving themselves
- Children are more likely to have their identities stolen, which may be impossible to correct as it may take years to even discover
- Children are likely to be the target of cyber bullying, which can have enduring effects on their psychology or even drive them to self-harm or suicide.
Many of these behaviors are outside the child's control, and caused as much by other's cell phone use as their own. Based on that, it is difficult for a parent to adequately manage all the risk factors involved in their child using a cell phone.
Based on how global and damaging these effects are, it would make sense to establish a minimum age that prevents children from using a smartphone until they have reached emotional maturity (approx mid 20s) and established a solid basis in better understanding the consequences of their actions, self-control, understanding of technology and finished the majority of their school work.
With that, I hand it off to Con!! Vote PRO and vote safety for all of the children!!
Return To Top | Posted: | Speak Round